So a few years ago I began experimenting with building skills on the amazon alexa platform. I found the developer experience to be top-notch and the sdk’s provided to be easy to use. I created two skills name phill and joe. From my understanding developing a skill on the Alexa platform consists of 3 basic components.

Intents are the VUI (voice user interface) equivalent of a software interface. They indicate the typical list of features and functionality to wish to accomplish from your Alexa Skill.

The above are the intents I had assigned to the skill Joe. Which are to perform sentiment analysis, Say a greeting, Send a text message, validate a Two-Factor Authentication code and perform a secure action.

Utterances are like the implementations of the above intents. They are essentially the product of applying context to intents to make them easier to understand and implement. Think of them as test cases for human interaction with our skill.

The above are utterances which basically train alexa to understand which intent to pickup when receiving a particular type of input.

The Actual Skill itself:

Alexa skill support a variety of execution backends. For ease of integration and convenience I chose to use AWS lambda. Attached below is the code in javascript for the skill joe.

I made use of different client libraries for all the various intents I wanted to accomplish. Such as twilio for sending text messages. speakeasy for two-fa and a simple sentiment analyzer. Lambda allows for configuring environment variables which contained all my configurations in a separate env file that could be uploaded directly to aws.

Hey everyone, I know it’s been a while I have been busy working on a bunch of exciting stuff to keep you guys entertained. This post is about a fun approach to solving a common problem we face. Wouldn’t it be nice if you could summon everyone at the press of a button. Well now you can using an AWS IoT Button. The original ones were given away for free at an AWS ReInvent event some time ago. The IoT button is basically a Dash button that is unlocked, programmable and 3 times more expensive.

Leaving all the business reasons aside. The IoT button comes with a non-removable battery and is good for only about 2000 clicks. Amazon definitely has everything figured out it took me just 5 minutes to get up and running. I just unboxed the button downloaded the app on my phone. Connected to the Wi-Fi, logged into my AWS account and next thing you know I could see all my lambda functions and API gateway endpoints that could be assigned to it. So the ideal use case for me was to invite everyone in the household for a given meal. It is normally a hassle to coordinate with everyone and try to work things out this project simplifies it down to a single click. This is what the solution architecture looks like. 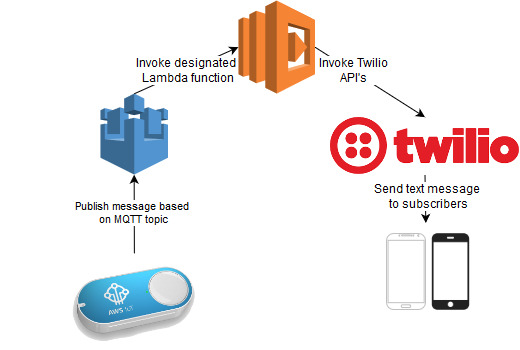 I have chosen to use the service twilio to achieve the end goal of notifying users. Twilio is an amazingly affordable telecommunication service that provides a programmable interface. The provide both REST endpoints as well as libraries for popular languages like Python, Javascript etc. You will see more projects of mine using them in the future. So each IoT button comes with a GUID dcn number on the back of it. This dcn number can be using the register the Button as a Thing for AWS IoT. Once the button is registered It is available as a trigger that can invoke a variety of AWS services. I have decided that 2017 is going to be the year of serverless therefore I have built this app to be run serverless using AWS lambda. As with everything I do this project is completely open sourced and can be cloned at

Its actually really cool so when the button is clicked there is a small led indicator on the IoT button that blinks white when triggered and keeps blinking for a while. It eventually turns either green (success) or red (failure) depending upon the outcome of the Lambda execution. The result being a text message sent from my Twilio number which is as follows. 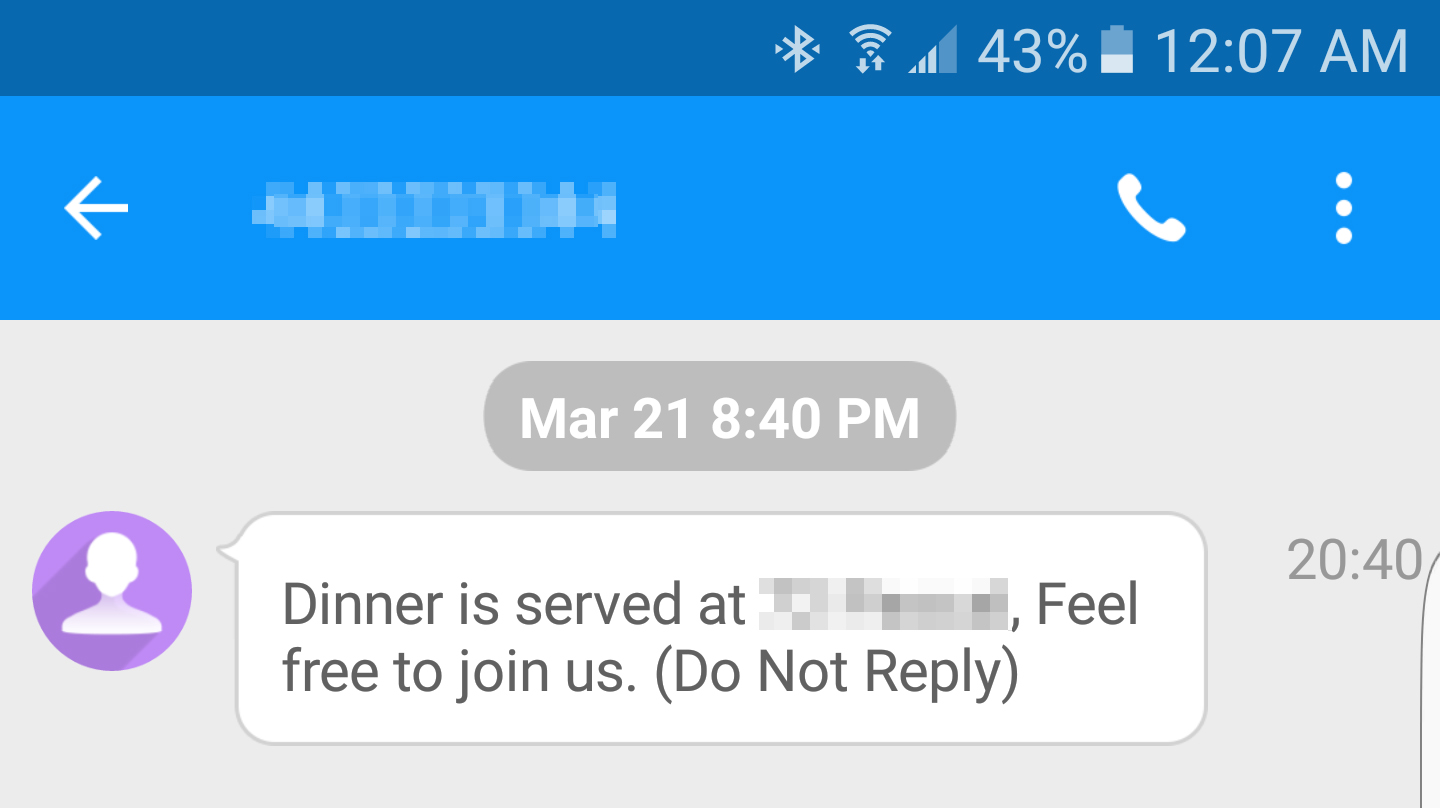 The size of this project is quite small but it has proven to be very useful. That being said there is always scope for improvement.

Hope you guys enjoyed this post. Expect more exciting posts to ECHO in the future. 😉 I received a very fortunate gift recently a B1248 LED badge. The led badge came with support software that ran only on windows and worked fairly well. However, given my love for engineering, I began to look around for ways to program it and gain complete control over it. I stumbled upon a fantastic library. This worked almost completely out of the box on my Raspberry Pi 3. However merely implementing something someone else has developed is more of an operations task. Me being on the development side of things thought of ways to improve it and I came up with this.

I build a simple flask app around it and gave it a REST interface. Sample code for which can be found here. I am always open to pull requests and public contributions. However, building a REST API wasn’t enough for me so I went ahead and ‘Containerized’ the app meaning that we would have to ironically use ‘-v’ during ‘docker run’ to mount a port. This REST API can be used to transmit very useful and critical information such as the example given below.

The original idea was to monitor all my VPS’s and check for downtime. However the library I use doesn’t support multi line text, which makes it not very useful to have lots of text in a marquee. It would also be really nice if this could show the current response time for all my API’s.